In life we have material things, and we cannot live our fullest experience without them in the modern world. I'd argue that we could drop everything, and go live in the mountains and be happy. However there are multiple facets of living, and numerous things you can't experience in that mindset.

We want to have things, meet people, have a family, socialize, and enjoy our hobbies. Hell we want to enjoy our Ikigai!

The point being is that while we can't get rid of everything, there is a real point to being minimalist in our own modern way.

Living as a Minimalist

Look I'm not going to say that I am normal, or that even being minimalist is completely normal. It seems to be something of a productivity guru thing, or that of a hippie mindset. However I can assure you that it is more common than you might initially realize.

Having less things makes you more free, and many of the world's belief systems talk about not being attached to belongings.

When you are free from your possessions, then they don't POSSESS YOU.

Decrease your Total amount of items

You can start by just Spring cleaning as they say, as literally tidying up will help you identify things that don't belong. The mindset starts there, and eventually you go into your closet. You find more items that probably have better homes, or that they don't really belong to you at this point in your life. They might be clothes, or keepsakes that meant something to you before.

It could even be hobby related. Gaming has always been a hobby of mine, and I doubt it will go away. I've been tempted to sell my 3ds and games, but I also know that Nintendo in particular be expensive on the used market. As compared to xbox or sony products, which means that if I get rid of this thing I am not CURRENTLY using I may actually want it down the line.

So it is something that will take up space while I don't use it, but I do know that I want to keep it. Conversely, my furniture for the most part like my chairs or my kitchen table that I had. I may not use or need, so I sold, and it was the same with my bike. The money was actually more helpful than the item, especially over quarantine where I sold a lot of things.

Akin to what I mentioned earlier about tidying up, as when you organize your living space it creates a new flow. I often find myself rearranging furniture in multiple rooms of my apartment. Your living space directly impacts how your mental space is too, and when you start to get foggy it could be a time to change things up.

I do the same with my digital space as well, changing wallpapers, and keeping very little to no icons on my desktop. It keeps things much more neat and efficient.

Don't get things you don't NEED

This goes out to the people who go to the store and end up with way too many things from Target or Wal-mart, etc. I can't actually tell you the last time I bought something at Target for example. There was this duffle bag I had looked at when window shopping, then got it a week later. However I needed a carrying bag, and so it was a necessity with my gear.

I don't go to the store and end up with too many purchases, and that isn't to say I'm special or some crap like that. I just grew up not as financially able to do that, so we window shopped a lot. However even as an adult I found myself interested in various products, and wanting to buy them. I just didn't, and that I think is the key point.

Being a Huge Tech Nerd and Techie

Look I've been building computers since I was ten thanks to my uncle, and that has lead me down a dangerous path of expensive purchases. I am quickly approaching the time to build a new computer as well.

One thing I have learned is that it is always worth it having a backup device. Whether it is a video card, headphones, or even just a wireless charger (chargers in general).

I can't tell you how many times I've gone somewhere with a different bag, and left my charger or headphones. I really like the brand Skullcandy, and I got a pair of headphones from them that started to break. I bought the same exact model, and now I have two. One might think it is excessive, but I literally have had countless headphones by them break. The reason I come back is the sound quality, build quality otherwise beyond endurance, and the price factors. Pros outweight the cons, and so in order to get around the main con I just buy a second pair.

When my PC broke around 2016/2017 I was distraught because my entire life was tied to it. Even scheduling out my clients, and so I managed to use my roommates for a time (which I happened to have built). I also made sure that from then on I had a back up computer to rely on. It also helps that if I were to start streaming again, I could have a secondary pc dedicated to just the stream part.

I had a SFF optiplex before, but it took up a lot of space and was aging. I got one of those office computers that is Ultra Small Form Factor in size, and now it sits comfortably in my closet or bag.

I am desperate to build a new pc, as for the past decade I have been looking at ways to build a super tiny powerful gaming PC. Yet the parts weren't quite up to par in that time frame, only prebuilt and excessively expensive computers were available. However with parts coming out this year I could possibly build a tiny pc, that is significantly more powerful than my full desktop I now have.

Make sure you have a backup device

Having extra parts lying around helps too, as my roommates GPU died on him (was old), and I had a spare that got him by until his new one arrived.

There has been plenty of times my minimalist side has tried to get me to get rid of old tech, but in the end keeping it around has saved my ass more than once. Honestly same goes for desks and chairs too, although I know I can always get a new one if needed.

That is the key thing too, we do live in a capitalist society, and if you need a new version of your material thing you can always get it again.

If it is something you Enjoy...

Then keep it, as it still brings you value. You don't have to get rid of everything simply because of the idea of minimalism. You're not like the YouTubers or extreme minimalists out there, you find your ratio that suits you best. It is just a matter of adopting the philosophy in general.

It isn't black and white, and you are totally allowed to keep your things. Just know when those things don't serve you anymore.

Note: Sometimes we think things are "done" in our heads, then eventually our hearts get nostalgic. Don't get rid of things that you think you might be severely nostalgic for in the future just because you are "cleaning up".

Finding a Balance Between the Two

It is these kinds of posts that I love, as it combines my love of technology, with my love of philosophy. The balance or bridge between the two is the ethos of PolyInnovator.

Finding a balance is my key principle in life, and has been a constant struggle for me when it comes to minimalism and techie-ness.

I think I have arrived at a solution that works, but I am still crazy about going smaller. Taking up less space for my computer, and things like that. It is a continuous process after all! 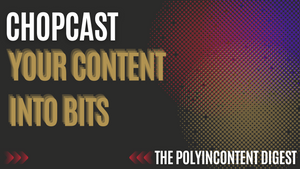 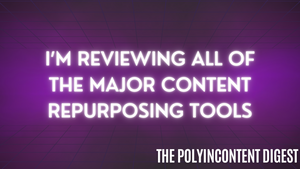 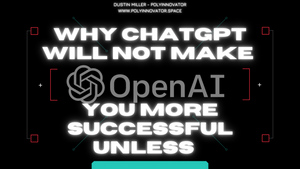