Ever felt like you wanted to do more than one thing, but feel like you have to settle down onto one?

I'm here to tell you that you CAN do multiple things at once, and that its okay!

You may be someone with the potential to do many things, and perhaps don't even realize it. The idea is being a multipotentialite, and embracing the potentiality of your ambitions. I'm starting a series based around my concept of a Polymath Spectrum, and I believe the start to any interdisciplinary lifestyle is embracing your potential.

With wide set of skills there lies opportunity.

Have you ever wanted to be that person that people go to when they need help?

I personally love helping people, and I quickly realized that the more stuff I knew about the more I could be of service to others. You may want to do the same, and achieve your goals. I resonate with that, and that is why we are here today!

You need to identify yourself as a multipotentialite, and that is what I am here to help you with today.

Most people think that if you spread your focus too thin that you are flakey, lack of ambition, or even worse a lost cause. That couldn't be further from the truth, in actuality a lot of multi's tend to be able to hyperfocus. This is because of the insane curiosity and passion we can have in a subject or idea. If we get into it, then there is nothing stopping us from spending 12 hours straight digging right in.

Now even if you aren't that type of person, and you do like to stick to your niche; I encourage you to stay and listen a bit longer. Perhaps even for specialists there can be something to learn about having a wide range of knowledge on top of what you know! ;)

Remember you are the kind of person who wants to do many things, and that is okay!

How we apply those skills makes us unique...

It is not about WHAT you know, but HOW you USE that knowledge.

If you spent 300 hours learning how to cut down a tree, but another person has spent 30 hours actually cutting down trees; Which person is going to have the most relevant knowledge? Knowing things does not matter if you do not do anything with them, and that could be as simple as bridging connections between knowledge pools to working in that field.

As someone who is a multipotentialite there is a common misconception, that because you learn about so many things there is an amount of flakiness or lack of control. However it isn't that simple, for it is more about innate curiosity. When you are obsessed with a subject that all you want to do is learn more about it, then that is powerful. It is a state of deep focus, that other people who focus more on specialties just don't often understand. I do think anyone can become a multi, but you need to develop your skill of curiosity (sure its innate, but also a skill at the same time).

This whole blog's ethos is being someone who is polymathic, which to me seems to be a synonym to multipotentialite. Almost like a Polymath who hasn't mastered any skills yet, but has the potential to. This is why in the "Polymath Spectrum" by PolyInnovator they are placed on opposite ends of the range.

What I think a lot of multipotentialites lack is organization, not focus, but the ability to choose what favorable interest potential comes next. This goes back to the specialist mentality that our society formed over the past hundred years, we as a group decreed that if you don't do just ONE thing, then you are unfocused. However whenever a multipotentialite digs into a potential they have, the amount of learning and deep knowledge gained is immense. Often far greater than just a specialist branching out, this is because a multi is not confined within the limitations of their specialty. Instead of thinking in the context of the sole pillar of knowledge, a multi forms connections between multiple areas. Allowing for a much greater bandwidth of transferable knowledge.

What being a Multipotentialite means for YOU

I made this post for two reasons, to help you identify whether or not YOU ARE a multi, or rather if you already know that you are; Then you can identify how to structure your life in the best way possible.

Structure is not the opposite to freedom, and a lot of multi's may see it that way. I want people to know that in order to progress you do need to have a system. Maybe not do this then this sort of thing, but rather a pattern you can repeat when you know things are getting stale.

Some multipotentialites will fight the idea that we need progression at all, although I see it as this: we have specialists in our society, and we have polymaths in our society. There isn't anyone in the middle because you would just be a "bimath" or something. Dualities are just dual specialties, and limits your multipotential. I want to show people that you can have a goal, and be productive as a multipotentialite. That is why I created the Polymath Spectrum, which is a guide to progressing as someone who wants to do many things.

I don't think it is easy being a Polymath, which IS the goal in the end, even if we don't see it now. By the end of your life you will become one purely from the multipotentiality, but what would be better is if we realize that now. Then actively pursue our interests aligned with that thought, and what we want to go into. It isn't a limitation, but rather an accelerator.

You will need grit, and dedication. As I said before it isn't easy, and in fact I would argue it is a lot harder than being a specialist. Sure many specialists spend a decade working on gaining the knowledge (of course lifelong, but it drops down after 10,000 hours), but Polymaths do that 3 or more times. Spending tens of thousands of hours learning, and as a multipotentialite you are at the start of that.

You can acquire this endeavor by purely aiming for it, taking your natural curiosity for many things, and putting it towards something. It doesn't have to be well defined, or even a confined goal. Just have an idea in your head, so that your systems can manifest towards action.

Take a moment and listen to a Fireside Micro-PolyCast on the idea of Micro-Focus!

Where do we go next?

Taking your Micro-Focus in each little curiosity swath as a Multipotentialite, and leading it towards a Macro-Focus in the road to Polymathy.

I've been pursuing the path of becoming a Polymath for half a decade now, and I am only in the beginning. I hope that I can inspire you to manifest your natural inclinations towards doing many things! The truth of the matter is that you DON'T have to do just one thing, and you CAN embrace your multipotentiality.

This is part of a mini-series in the OmniContent, all based around the PolyInnovator Multidisciplinary Spectrum.

Hey you might like this! It is an interview I was on, where the show is all about multipotentialites!

P.S. This is an OmniContent Episode! Meaning you will find a Slidedeck, Video, and PolyCast all relating to this same message! Won't be exactly the same information either, so I encourage you to go check out the other content forms! :) 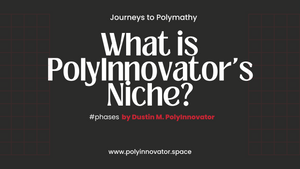 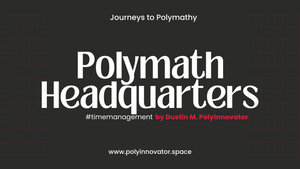