A Polymath’s View On World Change

Since the dawn of time there have been people with necessary skills. If a person doesn't have a skill, then we as a species go out of our way to learn it. Even if that means we have to create it ourselves, and over time this adaptation process has changed.

We went from hunter-gatherers who needed to be a jack of all trades kind of person, to the specialist for various technologies. However now it is the time of adaptation once again.

Global change phenomenon happens gradually due to the collective, or rapidly due to the individuals, and if we were able to combine those two pathways of change; Then the possibilities for exponential growth would be endless.

Why There Needs To Be Change

As I said before there is the constant change from adaptation over time, and it is the people going through that change that originate it. Whether intentional or not, it is there.

We never know for sure how things will turn out, and those who are successful end up becoming influential in the long run because of it. There is a lot happening in the world that lead to dire concern. Although we can change it, and we can have an influence on it ourselves.

How we go about that influence depends on the actions we take, and the paths we choose to go about it. Many people have been raised to think that specialization is the key to that, and for decades that has been the right path I would say.

Conversely with the rise of technology the paths are shifting once again, and the needs of change are innovating as a whole. Not really due to any individual person, but to the world as one. We can't fight that adaptation any longer, and trust me colleges have been doing that for at least a decade and half.

Many studies talk about the changes in employment is not specialization, but the combination of specializations. The understanding of depth in multiple areas, then being able to bridge them together.

How Can Someone Go About Making A Change?

Once again the world is coming towards the polymathic endeavors. Amplifying the importance of polymaths once again. Now my definition of a polymath would be far reaching, but in simple terms I would say it is someone who has mastered/specialized in three or more skills.

A specialized for context is simply one skill. Let it be known that there are still of course needs for specialized of various categories, such as the medical field. However all over in the workspace, and in every area, there is bridging of different skills. Being ahead of the curve is key to YOUR success. #selfdevelopment

The key to someone being able to #Makeachange is the ability to understand the "Width" of skills merging together the "depth" of the specialty.

How Can You In Particular?

By focusing on your own #selfdevelopment you can then foster your skills to a deeper degree. Taking action in your own Self-Education, and cultivating your career.

Once you have gained one, you don't stop there, and then continue to keep improving. Not only is pivotal to keeping your brain functional, but it will be the key to the success in your life.

Once you have one major skill deeply attained, then you can move onto the next. Combine what you know from that, and then create a new field from the combination of the two.

What Is The Goal?

Tackling this by yourself is going to be a tough challenge to say the least, which is why I created my own personal brand here to unite people together. Anything done alone can be amplified greatly with the help of other people.

The goal is to #MAKEACHANGE in a certain field by uniting two ideas together. Once that is done then the innovations of your actions will start to take place, and create new things for the world to benefit from.

My hope is that by creating PolyInnovator I can in turn expand my reach to a multitude of like-minded people to increase their success as well. Once my own progress has attained a satisfactory level, then I can create my magnum opus of a project. Of which you may learn about from the link below, but it is called the United Living Construct. A unifying platform of innovators and polyinnovators, to then be able to innovate at a much larger scale worldwide.

The U.L.C. is a hub of innovation, and is guided by the worlds greatest minds to achieve more than anything humanity could have before.

This is the place where polymaths THRIVE, and the PolyInnovator being the modern equivalent of a polymath it is only fitting! The potential for exponential change is only limited by the minds conceiving it.

Edit: This has evolved into the goal for the PolyInnovator Construct Community

What Is The Goal For The PolyInnovator?

PolyInnovator as a concept is just a "Polymath of Innovation", and would be a title people could use once they attained multi-skill mastery. This goes for myself, but considering it is my personal brand currently I am one now.

Hopefully others can eventually follow suit, and in their own right blossom forth too. Maybe instead of PolyInnovator, they would be a PolyDoctor, or PolyArtista.

A Modern Polymath of Innovation

To Make A Change On A Large Scale

Each individual person has the power to make changes on a large scale. It just takes a massive event for it to unfold, but as we said earlier the possibilities for exponential change will only happen if the world works together.

The large scale change combined with the smaller, will be the key to exponential growth as a species. #humanity

You Must First #MAKEACHANGE On The Small Scale

Essentially to change the macro, then you gotta start at the micro. You are the micro in the macro of the world.

“Let him that would move the world first move himself.” ~ Socrates

The change must first be instilled within yourself, and then it can manifest outside of your range. Sometimes beyond your initial belief, or even understanding. It is my hope that the actions I take today, are being manifested sometime in the future. Perhaps in ways I couldn’t imagine. I sometimes think to myself about legacy, and if my mine is to fail then so be it. The reason being is that I know that by the time I die I would have tried, and I won’t regret not taking action. Then the action I did take, which in this hypothetical scenario failed, would have inspired someone of the next generation to take my place.

Conversely in a more positive mindset I will think about how I am inspired by Leonardo Da Vinci, and how perhaps I am continuing on his path myself.

To make that large change, you must first take action within yourself. Your mind needs to decide it, your body activate it physically, your spirit believe it, and your emotions fuel it.

Become the change you aspire to create!

All efforts must first come forth from within, and you must be the epitome of the very change you wish to cultivate. There is no cheating the game of innovation, and the gross underestimation of how to get things done is a fault of many.

Globalization is just a construct that we use to understand the dynamics of the world organization. This level of detail is generally assumed to be from divisions of countries, but it has a more complex dichotomy than that. There are levels of intricacies that are often perceived as separate.

The various transportation networks, industries, governmental control over other lands, and the interactions of the people in those lands (especially now thanks to social media).

These various separation ideals are meant to be essentially just taxonomies on the organizational structure of the world. Going all the way down in complexity to the specialist and the polymath.

Nevertheless the complexities are meant to be simplified or replaced, or better yet innovated.

Nothing will change unless you change, that is the age old saying, and despite us talking about innovating old ideas. This one still rings true, but I wonder if someone will one day innovate upon that philosophy.

Going into the new world will be hard, but if we are to survive as a species, then it is imperative. At this point in time pareto's principle I believe comes into play, as up until now 80/20 of the workforce are specialists/polymaths.

I think in the coming decade, if not decades, that the ratio will flip. The necessary number of specialists will die down thanks to the rise of Artificial intelligence.

What I’m Aiming To Do About It

I talked about how things are going to change, and what the reason why all of those changes will be the course. However I never truly stated my own actions (note: feel free to state YOUR actions in the comments).

I want to #MAKEACHANGE in my own right by taking charge of my life. Creating content is something I was meant to do, and I can see that now. I've been a coach my entire adult life, and content creation is the extension of that. I can teach a much greater scale of people this way, and the vast network I will create with that endeavor will precede the U.L.C.

I believe PolyInnovator will one day become synonymous with Polymath, but until then I will just have to keep screaming into the crowd. Letting each person who opens their ears to the knowledge I can pass on, and then it will pay it forward.

Where I Intend To Take PolyInnovator

I've always had a lot of plans for the brand, but now that I've been treating it more like a sustainable personal brand business. There is a lot more potential for growth. To some people saying the world business would take some of the impact off the ideal, but I think oppositely.

We live in a capitalistic global society, and in order to really make an impact (let alone a dent) we need to follow the rules. Only then can we break out of the system, innovate, and #MAKEACHANGE.

I want you to get started on your own change. First go forth and study on Self-Development. That is your first step! 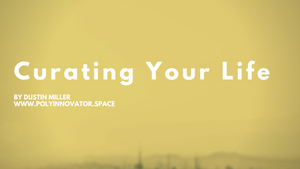 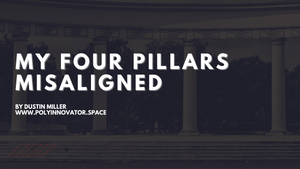 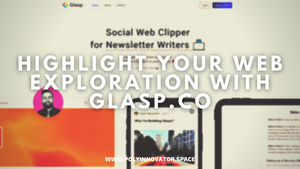 Highlight Your Web Exploration with Glasp.co 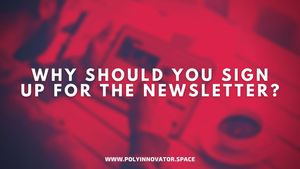