Being a polymath has to do with being well knowledgeable in much or many areas (poly), in which cases each bending art is its own pool of knowledge or skill.

Each element in the show's universe is a trade, something akin to craftsmanship, and that doesn't even include advanced techniques or side forms of bending.

For those who need a refresher or don't know exactly what I am talking about, then here is the intro to the show.

The Avatar is the bridge between all four nations, elements, and the humans with spirits.

Embodying balance between all of them. I would be wrong to say that part of my own interpretation of balance, philosophy, and even part of the origin of the Four Pillars Philosophy didn't come from watching this series.

The Avatar's Job, and Aang's Journey

Since the job of the Avatar is to maintain balance, then the person must be able to figure out how to do that in their own way. Considering each Avatar is the "same" person just reincarnated you would think it would be easy.

However with every new consciousness they have to relearn each ability and skillsets. More spiritually inclined Avatars like Aang can call upon their past lives for advice. Although it can be difficult, especially for non-spiritually inclined ones, such as how Korra was in the first season of her show.

Since each element is "new" to them, they then must search out for a master. Given how the cycle continues again and again, the various nations expect it to do so. Meaning that masters of each respective element are generally quite inclined to have the honor of teaching each young Avatar.

By the time Aang was able to start his journey he was on a time limit. About a year of time to literally Master each element. In order to be powerful enough to take on a much older and more experienced foe.

Training Under Masters in the Craft

One could easily probably show why the character Sokka was a polymath as well, as he was skilled in throwing boomerangs, wielding a sword, and many other weapons.

However it is Aang's training under various bending masters, that has me curious about his polymathy.

He had already "mastered" his native element of air by the time the show starts, but that is because he learned it quickly. He also had it from a young age, and so he had a baseline by being around it so much.

He became an Airbending "master" by creating a new move from the element, his iconic air scooter. This rise to being a master being the reasoning behind how he gained the knowledge of his title of Avatar, and thus leading to the events of the series.

Since he wasn't able to stay in his time period, and ended up being frozen for 100 years. The world had changed a lot, and all of the nations had lost hope of a new Avatar. Meaning the tradtional graciousness of masters teaching the next new Avatar is sort of negated.

He was still able to have that experience with the element of water, but in pursuit of the other two elements he had harder and harder times.

For Earth it was his polar opposite element, which means it takes special teaching methods to get that skill across. He ended having to find Toph who was such a unique bender, that she created an entirely new artform of Metalbending. It took some of that level to train him in that.

Given that the Fire Nation were the "enemy", then it was even harder to find a Firebending master in time. Eventually his old enemy, now friend, Zuko was able to step up and teach him just in time.

From a young age he was able to bend his native element, and even pushed the limits of what airbending could do. He was surrounded by masters of the element, and was the last Avatar to have been with the Air Nomads. Korra's new Air Nation didn't quite compare to sheer numbers of centuries prior.

The constant practice was also infused with spirituality, which is an important cornerstone to the Avatar's holistic life.

That same knowledge came in handy as much as the learning of the elements.

Each form of bending came from a prime source, being that of the four elements of nature. At least in the Avatar world.

Each element could be given to a person through Chibending, but learning how to master said element came from the natural world. Watching how nature worked, and more often than not from the animals that embody each element.

A great example being the Airbison, that command the air in order to fly. Being creatures that paired well with the Air Nomads as well.

Awakening from his 100 years of sleep, the first face he sees is that of Katara, one of the main characters. Who would end up eventually marrying each other. She too was trying to learn waterbending at the time, and despite him picking it up more quickly; She was certainly more of the master at the skill.

They spent time learning it together, as well as from a master in the north pole city. Being the first element he learns after his native one, almost being akin to learning new languages. He has spent the 2nd most time learning the water bending art, and it also being closer to air than other bending styles. This being because Tai Chi (waterbending is based off of) and Baguazhang (airbending's martial art) both being about flow and movement. Channeling the chi into another region, and moving smoothly from one place to the next.

As learning a new skill is hard, if you can find the common ground between both a skill you know, and the new one you are trying to learn; Then you will be able to "translate" your knowledge into the next one.

The tides are formed from the tug and pull of the gravitional effect of the moon. Even in the "ancient"-like world of the Avatar universe there was an inherent understanding of this.

They take a bit more of a philosophical, and even physical form in the Koi Fish of the North Pole. With the Yin Yang spirits that reside there.

Ancient waterbenders who would see the aquatic and beautiful dance of the fish, and the pull from the moon itself. Were able to learn the ways of waterbending from those primal examples.

Firebending | Learning the Ways of Your Foe

Given that the Fire Nation is that of a more militaristic country, and the fire element being more violent if used for evil. I am sure that part of the FN's origins are found within the Art of War.

The main villian of the series being the Fire Lord Ozai, or his children Zuko and Azula. All of which are fantastic Firebenders, then Aang's main experience with the element is with people he would percieve as evil.

Only once for a short time in one episode of the first season does he get someone to show him the light side of the fire element. However that is soured by him experiencing a traumatic experience of burning his dear friend.

It isn't until his rival and foe, Zuko, later becomes his closest friend, that he can truly see the beauty of the fire element.

Fire being portrayed as violent, and unforgiving was the main theme of the show for a long time. For that element I mean, but in the final season we get to learn that it wasn't always that way. The ancient Sun Warriors, who were the original firebending people, (akin to Aztec and Mayan cultures) who learned the element from the true masters... the dragons.

By the time of the show the dragons were all but extinct. Only a couple were left, and that is who showed Aang and Zuko the true beauty of the element. Not that of danger or hate, but that of life and light.

A bright fire that burns within us all. Not only did it show Zuko that he didn't need to fuel his bending from hate, but it also showed Aang that it wasn't a violent element. Rather something of the natural course, and the source of energy in the body. Almost like an analogy of Chi.

Earthbending | Learning to balance yourself with your Opposite

This was one of the hardest for Aang to learn, as it directly opposed his airbending ways. Constant movement and flow, whereas with Earth he needed to sit and wait. A hyperactive child told to sit and wait? No way.

However he did just that, not only did it teach him that he is far more capable than he originally thought. It also gave me him the clarity of how even unmoving objects can be valuable assets. More importantly to make himself that of an unmovable object, and a power to be reckoned with.

Just like the other elements the idea of bending the Earth was inherent, but it was the badgermoles that showed humans how to move the Earth in a formulated fashion.

Shaping the dirt to your will, and creating your own image from it. Being the most prevelant element even, given that everyone (including air nomads) needed to be on land.

Let's note that by the end of the series when he had the facedown with the big bad, he was not a master of all four elements at all.

One could say he was a master of airbending, since that was technically his title. However I am sure after a decade more of practice with the element he learned new things.

Given his exposure to water bending at a young age, and from people close to him; Then one could say he could be an expert at the water element, but he was far from a master. Often relying on the avatar state to do various advanced waterbending techniques.

Those being his two highest skills, and the next two being his weakest and hardest to learn. Fire and Earth.

His masters in those elements even say in the finale that he isn't ready with those elements, and that his "earthbending could use some work".

Given by the time of his death I'm sure he was a master, and even then that was only in his 40's. So still quite young in life. This is why I believe that Avatar Aang was a polymath. He may not have been a metalbender, but he understood the sub-element, and he knew how to do the seismic sonar like Toph.

Something a lot of Earthbenders fail to learn, and often don't even know about. Let alone being able to redirect lightning, an advanced firebending technique. Meaning that even though he did not master those elements, he was advanced enough in the important bits to know them.

Which could be said about any skill, if you know the important parts, then you know more than the vast majority.

Not only that but Avatar Aang learned each element from each of the Ancient Sources as well. Being the highest quality source to understand at a fundamental level of each element. It would be like learning physics from Richard Feynman or computer science from Ada Lovelace. If you go to the source, then you are going to get a more fundamental grasp of that knowledge area.

Who is to say what the level limit or minimum is for being a polymath? That is the question many researchers today are asking!

Why I want to be Immortal 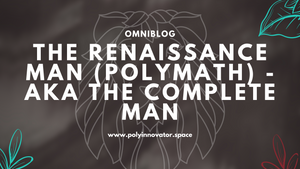 The Renaissance Man (Polymath) - AKA The Complete Man 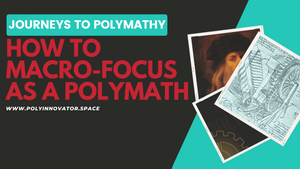 How to Macro-Focus as a Polymath